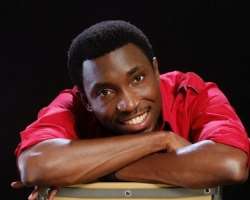 One of Nigeria's top vocal singer, Timi Dakolo, has now fallen victim of cyber bully a case which he is rarely a part of as he was recently called out by a hater.

The singer happens to be the face of popular bank advert where he preaches about the Debit card but this advert does not seems to go down well with some people one of which has come out to air her opinion.

According to the hater in question, she stated that the debit card advert annoys and irritates her so much and Timi could not keep silent and let that pass him by as he gave a fast response to that effect.