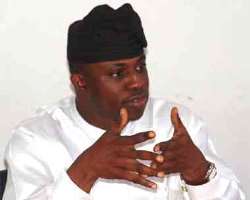 The Speaker of the House of Representatives, Mr. Dimeji Bankole, on Sunday dismissed allegations linking him to the controversial N5.2bn Rural Electrification Agency contracts.

The development came as some lawmakers allegedly plotting Bankole's removal on the basis of the allegation, among other issues, confirmed in Abuja that they had documents showing how the speaker allegedly got contracts worth over N690m from the REA deals.

The anti-Bankole forces, reported to be using the platform of the Nigeria First Forum in the House, claimed that 10 firms owned by the speaker and members of his family were allegedly used as fronts to get the contracts.

It was gathered that a motion by the group seeking the speaker's removal, may be raised on the floor of the House on Tuesday (tomorrow).

'With these documents, we can now react formally by way of a motion against the speaker this week, most probably on Tuesday,' a member of the NFF told our correspondent on Sunday.

But, the speaker challenged the Economic and Financial Crimes Commission and his opponents to prove his involvement in the contract scam.

His Special Adviser on Media, Mr. Ebomhiana Musa, expressed surprise that Bankole's name was still being mentioned in connection with the scam, more than one year after the EFCC had concluded investigations into the matter and arraigned some persons involved.

He challenged those linking Bankole with the scam to either produce a report from the EFCC indicting him or prove that the firms which benefited from the contracts belonged to the speaker or any member of his family.

Musa said, 'This thing is not new; this issue came up before, those involved were investigated, arraigned in court by the relevant security agency.

'If you want to get confirmation on whether Bankole is involved or not, the security agencies are there.

'You can also get across to the companies mentioned there; it is a very simple matter.

'You should be curious that an issue which was investigated and the suspects were arraigned in 2008; is coming up again in 2010.

'You should be curious to say 'why?' Something is wrong somewhere. Some people somewhere are up to mischief; I can't say more than that.'

Incidentally, a member of the Senate, Senator Nicholas Ugbane; a former Chairman of the House of Representatives Committee on Power, Mr. Ndudi Elumelu; and his former deputy, Mr. Mohammed Jibo, are among those whom the EFCC charged to court in 2009 for alleged complicity in the N5.2bn scam.

The other key suspects are a Permanent Secretary in the Ministry of Power, Dr. Abdullahi Aliyu; and the Managing Director of REA, Mr. Samuel Gakpe.

All the suspects are currently on bail.
When our correspondent attempted to get the comments of the Chairman of the NFF, Alhaji Anas Adamu, a member of the Peoples Democratic Party from Jigwa State, he said that he was in his constituency and was not prepared to talk.

Adamu told our correspondent that he was 'in Jigawa right now and will be back to Abuja on Monday (today),' adding that he would speak when he returns to Abuja.

However, another member of the group insisted that a motion was being planned for Tuesday.

'We must raise this issue, no matter the pressure any body will mount on us,' the source claimed.

A similar move was made by the anti-Bankole forces, but when the day came, nobody raised any motion in the chambers.