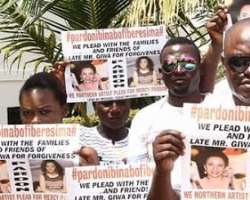 Despite the disparity between the different aspects of Nollywood with those in the North calling themselves Kannywood, Yoruba industry going as Yoruba movie industry and the English movies known as Nollywood, there still seems to be some element of love and understanding.

This is base on the fact that some Kannywood practitioners recently staged a protest to solicit for the pardon of actress and embattled AGN President, Ibinabo Fiberesima, who was sentenced to five years in Prison for causing the death of one Dr Giwa in an accident in 2005.

Some Northern actors held a pardon Ibinabo fiberesima walk in Abuja March 16th, which saw the long distance road walk to seek attention from the relevant bodies and family of the deceased.