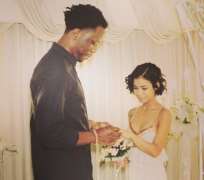 If there is one thing that is difficult to do, it is secret marriage for celebrities. Yeah! Secret marriages are trickiest to pull off as a full-time celebrity, but Jhene Aiko and producer Dot Da Genius has managed to tie the knot in private.

It was Dot Da Genius whose real name is Oladipo Omishore that ended this speculation of marriage on his Instagram when he wished the Grammy-nominated songstress a happy birthday accompanied by a photo of what looks to be their low-key nuptials. "Happy Birthday to my gorgeous wife," he wrote. "Happy to be on this quest with you!!!."

We can now say that Jhené Aiko is a married woman. Rumour has it that they have married in 2014.

In aphoto, Jhené is seen standing on an altar while wearing a long white dress with a bouquet of flowers in her hand.