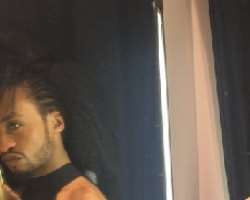 This does not mean that he has not gotten into fierce arguments over his sexuality comments because of his attires. Early this year, he had posted a selfie in the bathroom where he was fully dresses with a young man with towel around his waist.

When the matter got out of hands, he had quickly denied the gay status “I never said I was [email protected], people are just used to jumping into conclusion. I was only messing around in the picture that went viral. I am not coming out of any closet or wardrobe. The young man in the picture is actually my cousin,” he said.

Here comes Denrele in another bizarre dressing with a caption “Feeling brazen with myself, I walked into a female top designer store and my "Ashewo body" fit every outfit!”
We are wondering what his fans would say this time