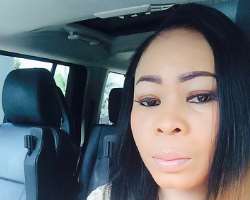 Popular Yoruba actress, Temitayo Adeniyi, is not that actress that makes headlines like some of her colleagues but she is silently making a name and curving a niche for herself in the industry.

She said she was having a sad face because she was guilty as charged because of her stubbornness but thanked God that all was well.

According to her, “That face I make when I'm guilty as charged. I almost lost something dear to me yesterday due to my stubbornness but I thank God for his Grace. Thank you Lord.”