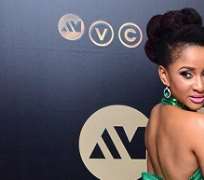 Award winning Nollywood actress, Adesua Etomi, who recently won the Best actress at the just concluded Africa Magic Viewers Choice Awards in Lagos, has come out bod to disclose that she is no longer scared.

The actress, who beat the likes Genevieve Nnaji, Mary Lazarus, Nse Ikpe-Etim, Belinda Effah, to claim the award gave this words as a way of giving someone hope since she was not expecting such a prize that came her way.

After struggling with top acts in the industry within her short time frame, the actress feels if she can make it thus far, the any hardworking fellow will get there also.

Adesua who won the awards for her role in the movie 'Falling,' said, “"I'm not afraid anymore. Be fearless.”