My Son Should Have Played Abraham Attah’-Banda 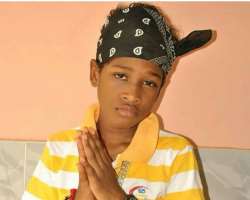 People who don't really know Ahmed Banda call him Bandex, an entertainment critic who is not scared of speaking out. He has made it clear that his exceptional child actor Rahim Banda deserved the role Abraham Attah played as 'Agu' in 'Beasts of No Nation.'

However, his son's due to his fair-coloured skin he was not featured in the award winning movie. Rahim Banda was the only young actor who was auditioned twice and on the eve of the auditioning at TV3 premises, Attah was absent.

He also added agreed to the clamour by the public for Abraham Attah's relocation to the US, the Entertainment Pundit said, “Yes Abraham should relocate to the US but should be trained to be versatile since movies like Beasts of No Nation comes once in a while with good story line and good directing.”

In an answer to Attah's recent comment that he will not feature in 'Local' movies, Bandex said, Beasts of No Nation is a local movie as compared to other Hollywood movies, adding that it is a low budgeted film.