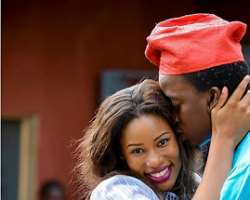 Singer, Gbemiro Tokunbo better known as GT Da Guitarman, is making serious moves to ensure that his marriage preparations to his lovely girlfriend, Annie, is recorded as one of the best as he was recently at his lover's family home to see her parents officially.

Recall that the singer had proposed to his lover about two months ago at the location where they first met, the singer recently took it a step further to prove his love by traveling to Ebonyi state for the family introduction.