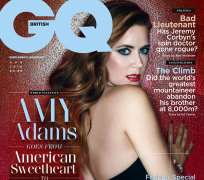 Rocking a cut-out bodysuit with her hair in bombshell waves and a red lippie, the actress quickly transforms from American sweetheart to a red-hot bombshell.

In her interview, Amy talks about the pay gap controversy for her role in ' American Hustle' , being paid less than the male cast in the flick and more.

See more photos from her cover shoot below!