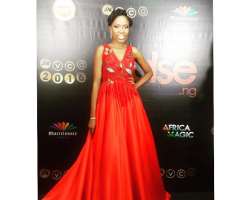 Nigeria, March 6, 2016: Kemi Lala Akindoju was the queen of the night at the #AMVCA2016 Actress, Kemi Lala Akindoju yesterday won Trailblazer of the Year award at the Africa Magic Viewers Choice Awards 2016. Lala who has featured in over eighty stage plays and produced five of her own with the Open Mic Theatre platform was announced as the 2016 AMVCA Trailblazer award recipient.

Lala who wore a red floral detailed print dress was visibly stunned by the honour. Lala continues to rise as one of Nigeria's leading actresses with outstanding performances in Tunde Kelani's 'Dazzling Mirage' and most recently Mildred Okwo's 'Surulere'. Her rising army of fans cannot wait to see her in Kunle Afolayan's new movie, 'The CEO'. Lala is a Global Shaper with the World Economic Forum (WEF), winner of The Future Awards Africa Actor of the Year prize, and producer at the British Council's Lagos Theatre Festival 2016.

She will be here for a long time to come. About Kemi Lala Akindoju Kemi Lala Akindoju is a World Economic Forum Global Shaper, thespian, producer and drama teacher. The Youngest person to ever produce the international play V. Monologues Lala Akindoju cut her teeth as a stage actor appearing in over 80 productions since 2005. Lala is a talent scout who has created several new stars with her Open Mic Theatre and has professionally consulted for MTV, Ndani TV, amongst others in the area of talent. She has also consulted for several art projects with the British Council, the iRep film Festival, Woman rising festival amongst others.

In 2010 she won the award for Actor of the Year at The Future Awards Africa and was recently selected for the International Visitors Leadership programme by the United States Public Affairs Section. About Red Media Africa Red Media Africa is a PR & Communication firm under the parent company, RED. An innovative media group focused on Africa, RED's vision is to excite and empower an evolving generation through the media's limitless possibilities. Built across tools and platforms, its Communication Division holds Red Media Africa, Red Marketing and Small & Medium, and YouthConnect; and its Content Division holds the Y! brands, including Y! TV, Y! Magazine, YNaija.com, Teen Y!, Y! 2015, the Y! Tech 100 and the Y! Annual Black Ball/Y! 100 Most Influential List. It also anchors a development firm, The Future Project Africa, which co-presents Africa's leading youth platform, The Future Awards Africa, and other projects including the Nigeria Symposium for Young & Emerging Leaders and The Future Enterprise Support Scheme.