Imeh Bishop Goofing Around with Wife at Lagos Hotel 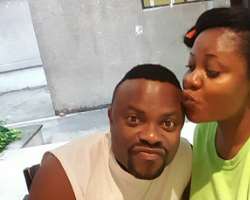 Nollywood actor, Imeh Bishop better known as Okon Lagos, is currently in Lagos with his family for the Africa Magic Movie Viewers Choice Awards which will be taking place today 5th March, 2016 on the Island.

The actor was seen relaxed with his wife in the hotel they were logged in Lagos and ensured that they made the single guys jealous.