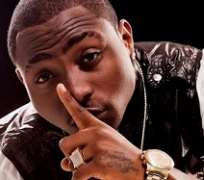 The Nigerian entertainment industry is really buzzing with great talents coming out each day. While Paul Okoye is busy recruiting new talents into his record label, singer, Davido, has just unveiled a new act into his HKN crew.

The new singer happens to be the son of Nollywood actress, Toyin Adewale, Mayowa Adewale better known as Mayor Kun.

It all started as mere fun when Mayor Kun, decided to make a cover of Davido's song 'The Money' and tagged the singer. Davido saw the short video and liked it which he later sent him a message to contact him and he gave him a gift. Little did many know that the singer had some hidden plans which he never hinted anyone about.

Today at an event held on his behalf in Lagos, Davido, surprised many presences as he announced that he has just signed Mayor Kun as the latest HKN artiste.