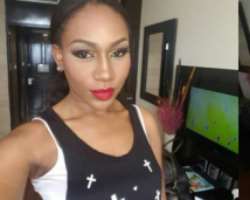 Nollywood actress, Ebube Nwagbo, has just proven to her fans that with her ever smiling face, she also has blood running through her veins and she's got no chill for any form of hate melted out on her.

The actress had released some lovely photos of her with heavy makeup and the experts in makeup design came firing her with one of them describing her as a “witch.”

Ebube might swallow some kind of insults but not to the extent of accepting someone calling her a witch as she immediately called out her accuser stating that, oh, really? It takes one witch to know another. Please could you help me find my way back? Anuofia.”