Bobo Rap Will Not Open Heaven’s Gate for Me…Olamide 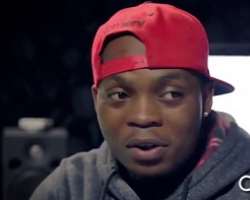 The latest trend in the Nigeria entertainment industry seems to be on cyber bullying and some Nigerian entertainers have recently been victim of such.

Olamide is just the latest to get such bully but being a street guy, he knows how to absorb such bullies to his advantage.

The rapper was called out be one of those music critiques on his style of mixing songs on his album but rather than feel bad, Olamide replied, “Bros if you fit mix I go happy to give you to mix oh."

Making jest of his 'Bobo' track which gave birth to the viral dance steps, the rapper made it known that the song will not open Heaven's gate for him but he fills fulfilled to know that his family and fans are alright.

In his words, “Omo Bobo Rap will not open Heaven's gate for me oh. If my family is alright, fans alright, I'm alright.”