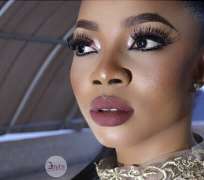 Popular On-air-personality, Toke Makinwa, is really not having a nice time with her fans due to the way she applies her makeup which has now been a topic of discuss.

The OAP followers have been urging her to slow down with the amount of makeup she applies on her face which to a large extent makes her look like a doll with some saying she looks like “a corpse”.

Not bothered with all the rants here and there, she seems to have gotten support from singer, Waje and Dabotan Lawson, who have come to applaud her way of life.

Waje pointed out that she wasn't making up for anyone but just making herself happy. “She didn't put on her makeup for any of you! Na wa.” While Dabotan applauded her how glowing she looked.