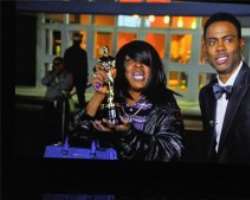 Rock – the outspoken black comedian chosen to host the Oscars months before the selection of an all-white acting nominee line-up for a second year – welcomed viewers to what he called “the white People’s Choice awards” on Sunday night.

Speculating on why the furor over diversity in the industry had taken root this year, rather than in the 1950s or 1960s, Rock said black Americans had “real things to protest at the time”.

“We were too busy being raped and lynched to care about who won best cinematography,” he said. “When your grandmother’s swinging from a tree, it’s really hard to care about best documentary foreign short.”

‘Racism row’ overshadows Oscars Awards
Turning to the present day, Rock joked that things would be different at Sunday’s Academy Awards, saying the traditional segment honouring stars who died is “just going to be black people that were shot by the cops on their way to the movies”.

A few blocks away from the glamor of Hollywood’s Dolby Theater, about 40 people gathered to make the case for more diversity in a rally organized by civil rights leader Al Sharpton.

Sharpton also called for Americans to “tune-out” the live telecast, the most watched non-sports TV event of the year.

Director Spike Lee, who shunned the Academy Awards ceremony along with actor Will Smith, instead attended a New York Knicks basketball game on Sunday.

However, a wider Oscar boycott largely failed to gather steam as black celebrities – including Kerry Washington, Whoopi Goldberg, Pharrell Williams and John Legend – all showed up.

“I really want to be part of the conversation so we have institutional change, so we never have a year like this again,” Washington told ABC television on the red carpet.

The under-representation of people of colour in the film and TV industry prompted pledges to bring more women and minorities into the industry and the Academy.

In one pre-taped parody, Rock ventured in a tuxedo to a cinema in the predominantly black Los Angeles suburb of Compton to ask several African-American movie-goers there whether they had seen any of the films nominated this year for best picture. None had.

But all said they had seen, and enjoyed, the critically acclaimed hip-hop drama “Straight Outta Compton”, which failed to earn a place in the best picture contest.