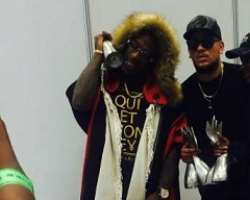 Singer, Burna Boy, over the weekend went home with an award at the fifteenth edition of the prestigious Metro FM Awards held in Durban, South Africa.

Burna Boy, who has never liked awards due to the way things play out while selecting the winners, as he made history on the night as he won the One Africa Award, becoming the first ever winner of the award.

The Spaceship Entertainment superstar, won two other awards for his collaboration with AKA on the South African act's hit song 'Baddest'. He went home with a Best Hit Single award as well as Best Collaboration for the song.

The award show was attended by musicians, celebrities and even South Africa's Sports Minister, Fikile Mbalula.