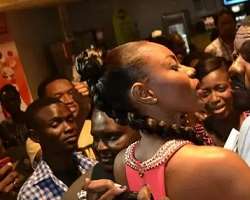 For a long time now, Ghanaian actress, Yvonne Nelson and John Dumelo, have not been sighted together and many have concluded that the two good friends have parted ways.

Though at some period, Yvonne Nelson, had misunderstanding with her best friend base on the fact that John, did not in the march for dumsor, which was aimed at calling on the government's attention on the constant blackout the masses of Ghana were facing.

They indeed settled their difference but things never seem to return normal. Yvonne later was seen with a new friend and colleague which they almost go to all events together in person of Bismark Nii Odoi better known as Bismark the Joke.

Many rumours have emanated that the pair are no longer together or best of friends but Yvonne has put the rumours to rest after she bumped into her best friend John and they had a short video together with John saying “it's unfortunate that they are together, part we have to go.”

This has gotten many of their fans applauding and calling on the two friends to come back and take things to another level since they understand each other more.