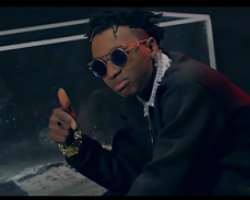 Davido's cousin, B-Red, is currently gearing up to physically beat up rapper Yung6ix and his crew anywhere he meets them in the country.

Though what would have led to B-Red's rant is yet unknown but the singer is seriously angry at the self acclaimed Billionaire rapper, Yung6ix, as he accuses him of wearing fake chains around.

With this, it will be recalled that some few weeks ago, Yung6ix, had expressed his dissatisfaction over some issues with unnamed persons as he threatened to expose their dirty acts if something was not done. Well, maybe B-Red could possibly be part of his enemies that is if he has such people though.