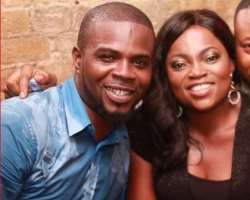 It all started with Monalisa Chinda taking another shot at marriage this year, 2016, now another popular actress, Funke Akindele is about taking same bold step.

The actress better known as Jenifa said a resounding 'Yes' to multi-talented musician, Abdul Rasheed Bello popularly known as JJC Skillz when he recently popped the big question of marriage.

It was gathered that the overwhelmed actress was moved to tears and speechless, when her singer lover went down on one knee and presented to her a beautiful ring.

More sources confirmed that the surprise proposal took place few weeks ago in Lekki on the set of her new TV Comedy Drama, Jenifa's Diary.

Funke Akindele has remained single after separating from her hubby, Kehinde Almaroof in 2013 under very controversial circumstances. JJC Skillz is a single father of three children, ages 18, 15 and 10 from three different women.

The couple has managed to hide their blossoming romance away from the public until some few weeks ago when Nollywoodgists.com reported it.