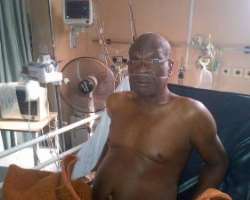 After much controversy surrounding ailing actor Olumide Bakare's N7 Million donation, the veteran who was knocked down with a serious heart related disease a couple of weeks back, has finally left University Hospital College, Ibadan, Oyo State.
Recall that Olumide Bakare was diagnosed for blood clot in 2013 before it generated to “Dissecting Aortic Aneurysm and Pulmonary Embolism” which has to do with heart related issues. Then as part of his medications, the Yoruba movie gist reports that the actor takes injection that costs him over #14,000 per one and it's called Clexane.
The injection which he takes 4 per day, has so far been injected in him for 21 days before he later cried to Nigerians for help.
He has now been discharged from UCH and gradually recuperating at home.