Davido Flaunts $80k, Thanks God for The Money (Photos) 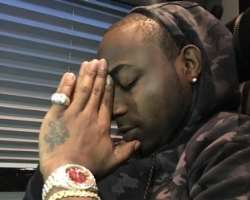 Won't you just wish to live the luxury lifestyle of some Nigerian celebs especially like Davido, who is not relenting in acquiring any kind of luxury of his taste?

The singer recently flaunted his wrist watch, which according to him is valued at over $80k, in series of new photos.

He went on to make his fans know that whatever he might have achieved today has not being his doing but God who has stood by him all along. "NO BE MAN DO AM ! NAH GOD"

But some fans believe that the singer waste his money on irrelevant things as many have suggested that he could have possibly invested such an amount of money a good business rather than spend it ona wrist watch.