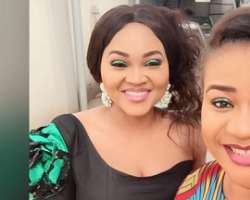 Gradually becoming a house hold name, Yoruba actress, Nkechi Blessing Sunday better known as Omoge Lekki, may have not been that long in the Nigerian movie industry, but within her short journey, she has been able to carve a niche for herself.

Aside her acting prowess, the actress has been able to attract fans with her well endowed structure which has continued to be a topic of discuss when she steps out on red carpet events but hey, she loves the way God has molded her.

Many have been wondering what is the closeness existing between her and fellow actress Mercy Aigbe, as the two are always seen almost at every events but within and outside Lagos, and Nkechi wasted no time in clearing the air on that.

She recently explained that Mercy Aigbe, has been one actress who has stood by her all along and helped to discover the real person she is. Nkechi also disclosed that Mercy was the person who gave her money to shoot her first movie 'Omoge Lekki' which will soon be released anytime soon.

In her words, “Mercy stood by me; in fact, she was the one that gave me money to shoot my first movie, 'Omoge Lekki.' She is a mentor to me, helper, Mercy Aigbe is a Small God because she gave me the chance to showcase my talent.”