I Never Wanted to do Music… Tope Alabi 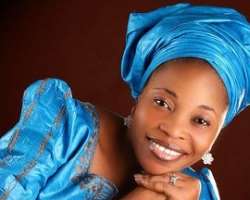 Among the top gospel artiste we have in the country, if Tope Alabi's name is not mentioned, then the list is not complete.

She is one of the most sort after gospel artiste; she is a brand to reckon with.

In a recent interview with City People, she disclosed that she was with Orire Caucus for 21 years as acting was her passion, but was never invited on any set.

She claimed she was so desperate to the extent she was ready to pay just to be featured in a movie.

After all failed attempt, she later got lucky and was featured in Abiku So Ologun De Ke, and a film by Alade Aromire.

The singer claimed she was never interested in musicals but it's the lords doing that she ended up as a musician.

She wrote:" I didn't like being a musician, acting was what I wanted God loves me and put me at the right position which was singing.”

She has successfully produced two movies, titled Ija Ibeji and Ikoko Dudu, but presently, she revealed she can only act in Christian movies.