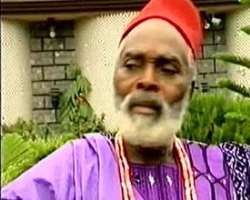 Since the last few months, Nollywood have lost quite some number of great actors. It's so strange the way they keep dieing like it was all planned.

Although we are all in a journey, for this world is not our own, someday we all shall go back to dust where we come from, but it has to be at an appropriate time, when we have fulfilled all our mission on earth.

Earlier today, ace producer Fidelis Duker announced on his page the passing away of veteran actor Festus Aguebor, who was popular for his roles in movies such as The King and I, Family Contract, Rituals and A Kiss from a Rose. He was also popular for his role as the grandpa in family series Household.

However, the cause of his death has not been disclosed, neither is there any arrangement yet for his burial. The veteran actor is a native of Edo state and was living in his home town prior his death.

Last month, Nollywood also mourned the death of young actor Olamide David who passed away at age 14. We also lost Dede one Day, who was recently buried . May their souls rest in Peace.