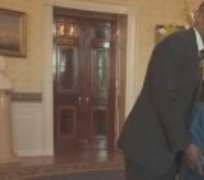 President Obama and first lady Michelle Obama  hosted 106-year-old Virginia McLaurin at the White House more than a year after a petition was launched to get her an invite.

McLaurin, who was born in 1909, had a whole social media campaign going in an effort to meet the president.

In a video posted to YouTube in December 2014, McLaurin says, “I didn’t think I’d ever live to see a colored president. I am so happy.”

McLaurin’s campaign to meet the president included a Facebook page as well as a White House petition .

McLaurin’s wish came true last week, when she met and even danced with the president and Michelle Obama. The White House tweeted video from the meeting on Sunday.