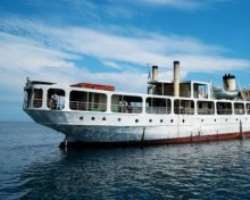 Millions of people in southern Africa are facing hunger this year because of a drought that has caused many crops to fail. Among the worst-affected places is Malawi, the poorest nation in the world. Beth McLeod recently travelled the length of Lake Malawi on a boat that was built in Scotland when the country was a British protectorate.

My journey began in the aptly named town of Monkey Bay, where a troop of baboons strutted about the ticket hall, eyeing up the baskets of plump tomatoes carried by some of my fellow passengers. This was the southernmost point of my voyage all the way up Africa’s third largest lake. Our destination was some 300 miles (480km) to the north, near Malawi’s border with Tanzania, which I hoped to reach two-and-a-half days later. I had been warned that it could take longer as the MV Ilala didn’t adhere to her timetable all that strictly. She was the star of Lake Malawi – and an ageing, temperamental one at that – carrying cargo and passengers back and forth every week.

Built on the Clyde in 1949, the Ilala was shipped in sections to Mozambique and brought inland by rail to landlocked Malawi. Stepping aboard invoked a distant, glamorous era of steamship travel. There was a mahogany-panelled saloon bar on the middle deck, and a dozen cabins, some for passengers, some for senior members of the crew whose job titles – Second Engineer, Chief Officer – were stencilled on the doors in an old-fashioned font. The Glaswegian craftsmen who built her would still recognise much of their handiwork, though the 65 years she’d spent on the lake had not been kind. She was rusting, battered and tired.

The lower deck had rows of upright, metal benches which third-class passengers lay along and below, trying to make themselves comfortable. A couple of chickens had escaped from the baskets they were being transported in and wandered among the seats. A goat was tethered to a handrail. From the top deck flew the flag of Malawi, its normally jaunty colours darkened over the years by fumes from the funnel. The original steam engine had long ago been replaced with a diesel one that coated every surface in black. For this reason the crew, who all wore crisp white uniforms in port, changed into their normal clothes once on board. Even the captain, a short, round man who we stood beside on the bridge as the Ilala eased away from land, had put on a well-worn, stripy T-shirt. “The Ilala is like an old lady,” he told me. “And we must take great care of her, because she is important to so many people on the lake.”

The journey north was punctuated by 10 or so stops, some at remote villages and islands where the Ilala was the main link with the outside world. Few had jetties, so she would drop anchor while two lifeboats were lowered into the water. Once crammed full of people and cargo they sped towards the shore and deposited their passengers, who waded the remaining distance to dry land. One family appeared to be moving home and loaded a double bed, wardrobe and three-piece suite onto the groaning boat. One larger town on our route did have a jetty, but it had fallen into the lake the day before we arrived. This meant the helmsmen had to work through the night to load a large shipment of maize on to the Ilala using the lifeboats.

The maize had been imported from Zambia because of a shortage in Malawi. The World Food Programme warns that because so little rain has fallen 17% of the population now face hunger. Many Malawians grow their own maize to feed their families, even those who have other jobs. Like 50-year-old Gilbert, a smiling man with greying hair, who I met as he served plates of rice and beef through a hatch in the lower deck canteen. He earns around £26 ($37) a month. “This year,” he told me in perfect English, “the whole crop I planted back in Monkey Bay has failed. People are hungry,” he said. “And there are few fish left in the lake because there are too many fishermen.”

The maize was destined for the village where he grew up, a collection of huts that clung to the lakeside as the wall of the Rift Valley rose steeply behind, the mountains encircling the village. The only way out was the water. The whole village turned out to watch the Ilala unload. Boys paddled dugout canoes to the ship to sell fish to the passengers and pounced on stray kernels that spilled from the bags of maize. By the time we moved on darkness had fallen, and the next stop was mine. So I bundled aboard the lifeboat just a couple of hours behind schedule. After wading to shore with my bags over my head, I looked back at the Ilala, lit up in the dark water. And I watched as the grand old lady of Lake Malawi gave a blast of her horn and sailed away between the twinkling lanterns of the fishing boats.