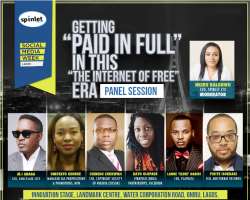 Africa’s leading music streaming and downloads service – is set to show a huge presence at this year’s Social Media Week, SMW. The global event, which will be hosted in major cities that include Lagos, Hamburg, Jakarta and New York, is a week-long event that will begin on Monday 22nd February. The theme for this year’s event is Reimagining human connectivity.

As part of the events line-up for the SMW, Spinlet will collaborate with Beat FM to produce a special ‘Music Day’, at the Landmark Events Centre in Lagos as well as host a special ‘Jam Session’ that will feature special performances by leading Nigerian artists at the Spinlet HQ.

Speaking on the rationale behind Spinlet’s involvement in this year’s SMW, “Social media has become a huge part of the music industry,” said Nkiru Balonwu, CEO of Spinlet. “Musicians use it to connect directly with fans and we encourage that from the artists who distribute their music through Spinlet. Beyond that, social media is changing the very nature of media itself, the way we communicate with one another, the way we’re accessing new music and art. The combination of Music Day and a high profile Spinlet Jam session, all centred around Social Media Week, is a great way to demonstrate how music and social media are together reshaping all of our lives in 2016,” Balonwu added.

The seriousness of this discussion will be followed-up by a more light-hearted activity on Thursday, 25th February, when a special Spinlet Jam session, reflective of the entertainment and communicative natures of music and social media, will be made open to the public and hosted by Beat FM OAP, Jimmie. There will be performances from artistes like the amazing producer and artiste, Samklef, Rocker Clay and Chocolate City artistes - Ruby Gyang, Loose Kaynon and Koker. Nigerian Breweries Plc is the official beverage supplier at the Jam session which will hold at Spinlet HQ Plot 2, Block 127, Bunmi Olowude Street Lekki, Lagos.

During the week-long event, Spinlet has also partnered with Four Points by Sheraton Lagos, Twenty 2 Ten clothing, Afrocabs and Silverbird Cinemas to reward their audience with prizes that include a dinner for 2, Snapbacks and movie tickets. Spinlet is using this opportunity to reward their faithful and loyal social media followers.