How Davido was Arrested by Dad 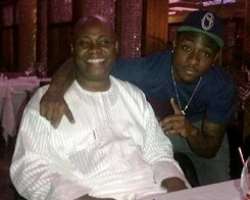 Every celebrity today didn't just become a celebrity, no matter the rich upbringing some may have, they all have a story.

Truth be told, talents sells your work, no matter how rich one can be, if the true talent isn't there, what you are doing would only sound like constituting a nuisance .

Popular music artiste Davido, who addresses himself as O.B.O, Omo Baba Olowo, is a top notch artiste in the country, having hit singles to his credit.

His story can't be referred to grass to grace because he was naturally born with a silver spoon; however, he does have a story because he also struggled through some huddles to reach out to his dreams, music.

According to Fada Magazine, At 16 he was taken to Huntsville to get a college degree, but Davido wasn't ready for education, his passion for music was burning and that made him loose concentration in his studies and his grades dropped.

After three semesters, he disappeared from school without his father's knowledge for months. After several failed attempt by his family to locate him, he returned to Lagos in 2011 with tattoos and piercing, which was distasteful to the dad and he got him arrested at the airport.

After much talking, he compromised with his father and went back to school. He dropped his first single while in school and he came to lime light with the song Dami Duro.

Today, Davido is a house hold name, with several hit singles, but he definitely didn't get it easy with his family to do music, been the son of a multimillionaire, but through the odds, he never stopped on the pursuit of his career and his sound is well accepted by many.