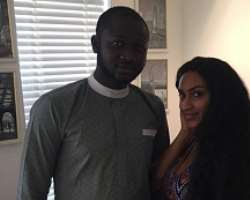 Ghanaian actress, Juliet Ibrahim, is seriously enjoying her job which is acting and this time, the actress has taken it a step further as she features in her first Hausa movie, 'LADAN NOMA.'

The actress has been penetrating the Nigerian movie industry with full force and she does not seems to slow down or allow anything weigh her down.

First, she worked with Mercy Aigbe, on a Yoruba movie, where she was a lawyer and she was able to deliver her Yoruba lines well. With the success of her role in the movie, she has proven that she can handle any role and that has earned her the Hausa movie role.

Anyway, she looks like and Hausa lady so her beauty best matches the genre she is giving a shot at. All thanks to popular Hausa movie production outfit, Uzee concept, who decided to engage her services to tell the Hausa story.