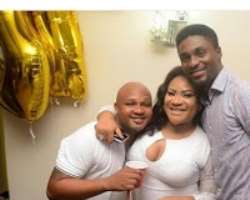 Last week, Toyin Aimakhu's estranged husband, Niyi Johnson shared a photo on his instagram page where he was flanked by a 'mysterious' woman.

Well, it seems she's no more a mystery as the actor has also moved on since his wife is already in a new relationship with top Yoruba movie producer, Seun Egbegbe.

Rumours have it that another Nollywood actress - Nkechi 'B' Sunday and Niyi are in a deep relationship.

The light skinned actress shared some pretty close photos of both them on her Instagram page but took it down after a while.

She also celebrated her birthday on Val's Day and Adeniyi Johnson was present at the house party.