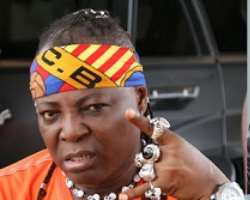 Julius Agwu is a well respected comedian in the country; he is also seen as one of the A-list comedians Nigeria has produced.

He recently held a show which he named 'Life as i see it'. The show was initially rumored of having a poor turnout in the event.

Charlce Oputa popular known as Charly Boy who is known for his bluntness regardless the caliber of the person he wishes to address, has recently call out Julius about his recent event.

According to Area father, as he is fondly called, he feels it was a waste of money for him to have attended the event, saying, it was very boring. He went on to say he had high expectation, but it was sadly crashed.

Charly Boy pointed out the failure to be the fault of Julius Agwu, as he turned a comedy show into a revival program, when he constantly began to preach rather than entertain audience, which was practically why they bought ticket all the way to enjoy.

He went on to say, he blames it on the scare Julius Agwu got when he went through the brain surgery, as that could have propelled his thoughts of giving thanks to God, but he simply choose the wrong time and wrong venue to do it.