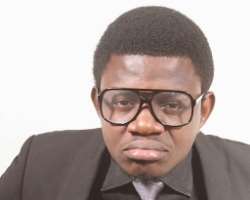 Sometimes, it is good to get to know how romantic some of these Nigerian celebs can and Nollywoodgists.com decided to hold down comedian, Chidi Uzoma better known as Baba D Baba, to seek about his romantic life but he wasted no time in explaining what he loves to do with a woman.

He revealed that he cannot get down with a woman without starting with a kiss since it is what he loves doing.

The comedian also added that he cannot he cannot date a girl that can't kiss as he prefers kissing more to s3x.

According to him while speaking with Nollywoodgists, “bros, I prefer kissing o, infact, I can't date a girl that can't kiss.”

When asked on what's so special about kissing for him he said, “I can't just explain it but I can't have s3x without kiss first. I'm just a very romantic guy”

Despite how busy the Nigerian entertainment industry is, Baba D Baba, is wasting no time in maintaining a stable stand in the industry as he has just released a romantic comedy skit titled 'TEMITOPE PEE.'

According to the comedian, 'TEMITOPE PEE' is a call girl the comedian wanted to give a cheque but he ended up not giving her the cheque because she could not spell her name.