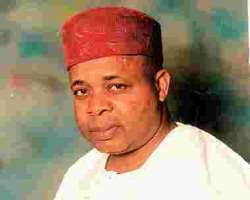 Former Senate president, Chief Ken Nnamani
Following their refusal to appear before the National Working Committee of the Peoples Democratic Party which met in Abuja on Thursday, the party has announced the suspension of 19 of its members.

The party in a statement by its National Secretary, Alhaji Kawu Baraje, said the party was surprised at the refusal of the suspended persons to appear before the NWC, 'despite extensive invitations extended to them.'

The statement reads, 'The National Working Committee of the Peoples Democratic Party (PDP) at its meeting held on the 22nd of April, 2010 considered current political events in Nigeria and came up with the following resolutions:-

'The NWC expressed its surprise at the refusal of members of the party, operating under a group called the 'PDP Reform Forum' to appear before it, despite extensive invitations extended to them.

'The NWC is of the view that the concerned members had adequate notice but declined to utilise the opportunity granted them by the invitation to explain their roles.

'The NWC held that the decision to dishonour the invitation to appear before it was a calculated attempt to disregard lawful directives of the party in order for them to continue to ridicule the party, contrary to Article 12.1 of the PDP constitution.'

The party said the suspension was in accordance with Article 21.4 of the party's constitution.

Their suspension has been referred to the National Disciplinary Committee of the party for further necessary action.

Nnamani, Wabara, Masari and Ugochukwu had claimed on Wednesday that they did not receive any invitation from the party to appear before the NWC.

The party had summoned them to appear before the NWC over allegations of anti-party activities.

However, Nnamani told our correspondent on the telephone that the suspension of members of his group from the party was an act of 'recklessness.'

He said that while such an action was not in the interest of the nation, it was part of the impunity that the group had been accusing the party, under the leadership of Chief Vincent Ogbulafor, of.

He maintained his earlier stand that he did not receive any invitation, and that it would be wrong for him to base his appearance at the NWC meeting on the basis of newspaper reports.

'Our meeting is in line with Article 9.2.4 of the PDP constitution, which encourages members to hold regular meetings, gatherings and social activities aimed at developing familiar bonds.

'This is part of the impunity and recklessness that we are trying to guard against. We in the PDP Reform Forum are only trying to proffer ideas to move the party forward. It is unfortunate that in this age, that people are resisting reforms. This impunity cannot help our country.'

Meanwhile, Nnamani said in Abuja on Thursday that Nigerians had not fared better under the PDP, 11 years after the nation's return to democracy.

Nnamani, who stated this in Abuja on Thursday during the meeting of the PDP Reform Forum, also said that the party had become a liability to Nigerians.

He said even members of the party were not left out, as majority of them had nothing to show that their party had been in power for 11 years.

Looking at the party members, he asked, 'How many of us here now can say we are better off now, yes we have been in power for 11 years?

'But are we better off today? That is a question you should ask yourself. Unless we are courageous enough to ask ourselves, we will be deceiving ourselves as we go into 2011 elections.'

He regretted that Nigerians believed that any election won by the party in the country was either rigged or manipulated, adding that only polls won by opposition parties were being considered to be free and fair.

Nnamani, who is the chairman of the steering committee of the reform forum, said that most of the meetings called by the leadership of the party to deliberate on vital issues were a mere rubber-stamp.

He said issues were never deliberated upon as attendees were always coerced to ratify decisions already taken by some unnamed powerful people before PDP meetings.

He said he told President Umaru Yar'Adua sometime ago that it was wrong for him to assume the leadership of the party and at the same time be the President of the country.

He, however, did not say what the response of the President was.

'If we run the party properly, the party should exert its own; we should not confuse the two, between administration and governance. And that is what we want to discuss in an atmosphere like this.

'We have been holding several meetings, at the party headquarters and all we get is 'yes,' 'approved,' 'no objection.' How can a party grow in that stead? So a group of us decided to start a journey, and it is because of those that are benefitting from the skewed system.'

He debunked the labelling of members of the group as dissidents, saying what they had gathered for was to discuss how to move the party forward.

'I don't see anything anti-party about this. And we invited everybody. This is a party affair. People should know that politics is about resolution and conflict,' he added.

While saying that the aim of the meeting was not to remove the leadership of the party, he said its decisions would be sent to the headquarters of the party and members of its National Working Committee and Board of Trustees.

Also speaking on the occasion, Masari lamented the declining fortunes of the party.

He said the party lacked internal democracy as candidates for various elective positions were normally chosen by a cabal without primaries.

A member of the party's BoT, Alhaji Iro Dan-Musa, traced the crisis of the party to the fact that majority of members of its NWC were never a part of the PDP.

He said that since they originally belonged to rival political parties, they were not familiar with the ideals of its founders.