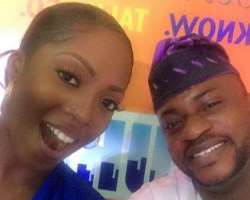 No matter the status one attains, there will always be that other person who is more famous than the next person. For Mavin records first lady, Tiwa Savage, she knows that respect is needed when she comes in contact with her elders.

She recently proved that she is well groomed from home to her matrimonial home as she was recently disclosed that she was shy to greet her protégé Yoruba actor, Odunlade Adekola.

The singer explained that she was seated next to the actor at an event recenyly but could not summon the courage to call him until some minutes later before she could open her mouth to beg for selfie.

“Guess who I met today. My husband is so jealous lol because Boss Odunlade Adekola is one of his favorite actors I was shy sitting next to him but eventually summed up the courage to ask for a selfie. Such an honour,” she wrote.