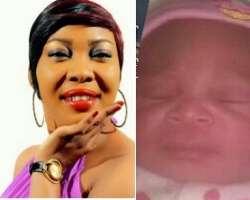 Yoruba actress, Bimpe Akintunde better known as Omotodun, has just delivered a baby girl and both the mother and child are said to be doing fine.

Adebimpe gained attention amongst movie buffs with her movie 'Wasilat Coded' and has since gone to become a name to reckon with in the movie industry.

The actress had some years back made headlines when she was rumoured to be romantically linked with fellow actor, Murphy Afolabi, which they had since denied.