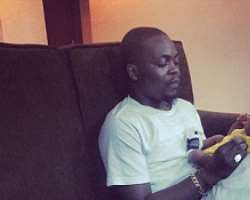 YBNL Boss, Olamide, was absent some weeks back because he needed to go make some money in Ogun state when he was invited to perform in the state which celebrated its 40 years anniversary in grand style.

Though money is needed but the singer missed his son, Batifeori Maximiliano Adedeji, birthday as he turn a year older, which clashed with the event but someone like Shina Peller, was on ground to care for his son in his absence.

Shina Peller, got a customized car for Maximiliano's birthday.