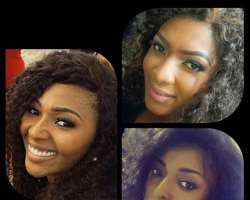 At the first look at the photo mix of top Nollywood actresses, Lilian Esoro, Yvonne Okoro and Esther Audu one would easily mistake them for a set of identical triplets.

Interestingly, the three actresses had no inkling they look so much like each other until one of their fans spotted it out and brought it to their notice.

Esther Audu is an upcoming starlet who has within a short time won the hearts of so many producers in Nigeria.