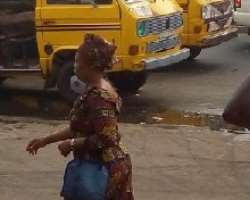 Mixed reactions have continued to trail the Lagos state government task force uniform as they patrol while monitoring the BRT lanes.

The uniform is almost the same with that of the Nigerian Police as they are also asked to wear a Blue and Black uniform with a Black beret.

Some road users have complained that the uniform idea is wrong as it could sometimes be used especially at night to impersonate the Nigerian Police.

The BRT task force is aimed at monitoring drivers who try to ply the BRT lanes as they will be arrested and their cars seized.

While some are kicking against the uniform, some believe that it is an idea of introducing state policing as they will not be surprised if they start seeing them with guns just like the Civil defense.