Cossy Orjiakor Continues to Spend Thousands of Naira on Tattoo 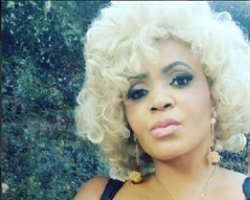 Nollywood actress Cossy Orjiakor, has just gotten many talking when she revealed her latest tattoo and some fans have been suggesting other places she can get it done.

These days, the actress has become more popular with social events than acting itself which she is known for. It will be recalled that earlier in the year, she announced that she will be getting married but did not disclose who the lucky guy is.

Fans and the media have been inquiring about her love life but she is not ready to talk about or give any little clue.

Well, curvy and naturally endowed actress has just disclosed that her new tattoo which is meant to cover an old one needs some painting as she will be going back to get it repainted.