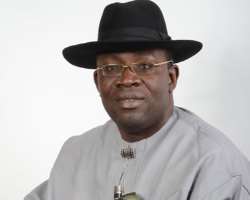 The people of the Niger Delta should display oneness, brotherliness, love and strong bond of unity as displayed on this occasion.

That the people of Niger Delta are united was demonstrated yesterday at Rumueprikom in Obio/Akpo Local government area, home of the winner of the Rivers state governorship election that was wickedly disputed by the APC infiltrators.

In this peaceful community, our great leaders gathered yesterday to rejoice with governor Wike in a Thanksgiving service organized due to the victory God gave to the people of Rivers state as they were liberated from an arrogant and lawless former governor Amaechi who squandered the resources of the people of Ruvers state to sponsor oppression (Buhari/APC).

Traditional rulers, captains of industries, clergy men, and good people of the Niger Delta and outside were in attendance to felicitate and thank God for the great wonders he performed.

In short, the occasion was very grand and successful.

Among the very happy ones in attendance was governor Dickson, who himself last January defeated his APC opponent in the governorship election that was concluded on the 9th of January, 2016.

Governor Dickson like Wike faced a very fierce opposition from those who thought federal might could have won the governorship election for them but was proved wrong by God when the opposition was disgraced in the election that saw a high level of violence caused by the opposition.

In a few days from now governor Dickson shall be sworn-in for a second term as the governor for another 4 years.

It is my strong belief that the good people of the Niger Delta zone and beyond will be attending the epoch-making ceremony that will usher in the countryman governor for another fruitful term in office.

We hope that those who failed to attend the event of yesterday for whatever reason will come to rejoice with the winner of an epoch-making election which kept the state tensed during the period of the first and the rescheduled elections that saw the countryman governor victorious.

Let the spirit of oneness, solidarity, love, peace and unity shown during yesterday's thanksgiving service in honour of the victory of Nyesom Wike be displayed as the great day of the second term mandate comes up.

We call on the losers to come and join the winner not only to celebrate, but also support him in building a very strong and united Bayelsa state.

May God Bless the countryman Governor and his fellow PDP governors.