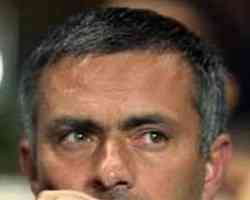 Jose Mourinho
Jose Mourinho hopes that Inter Milan can become a legacy of football to match Barcelona after guiding his club to a 3-1 win over the defending European champions.

Primera Liga leaders Barcelona threw away the lead to lose at the Giuseppe Meazza in Tuesday's first leg of their UEFA Champions League semi-final against Inter.

The Italians are now favourites to progress to the final in Madrid, but Mourinho, who worked under Sir Bobby Robson at Barcelona, remains in awe of the history and tradition of Pep Guardiola's Catalan club.

After goals from Wesley Sneijder, Maicon and Diego Milito countered Pedro's opener, he said: 'Barcelona is a beautiful school of football.

'It's a football school, it's fantastic. This is a school that we are not at yet, but I hope that Inter can become this.

'Inter is a club which often changes its culture of game and coaches, or it used to change these.

'I hope Inter can find this stability in future, and they can do it with wins because wins are important for people to believe in a way of playing.'

On Tuesday's evidence, Mourinho's Inter do not have too far to go if they are to convince Europe that they are on the right path.

Yet there is no guarantee that they will still overcome the last hurdle on the way to the final ahead of a daunting second leg at Camp Nou.

'We are not playing a small team, we are playing Barcelona; a great team with a great coach and great fans,' Mourinho said.

'We go to Barcelona and we are ahead, and we want to go into the final, but we are not there yet.'