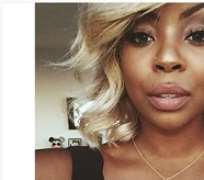 The idea of same s3x marriage is totally frowned at in Nigeria as it is considered a crime and punishable with 14 years in jail term.

Though some people still practice this act in disguise but there is no evidence to nail any one. What has just caught the attention of some Nigerians is the billionaire daughter of late Deinde Fernandez, Abimbola Fernandez, who has just opened up about her sexual life.

Abimbola Fernandez, who seems to be the black sheep of the family publicly revealed her status while admitting that her parents gave her the best training and discipline ever but she has her life to run.
According to her, “I was raised well by my parents who taught me class in the face of adversity and dignity above all. For those who knew my father & what he stood for, I reassure you I know my way.”

Her public confession came as a shock to many but not to those based in the US where it is legal. “Actually I don't have to prove anything to anyone. My private life is my private life as is my account numbers etc I refuse to engage. Trying to shame someone for who they befriend based on sexuality is absolutely horrific and might be illegal stateside. My father loved his children no matter what. LGBTQ fly your flags never let anyone shame you.”

It is being rumoured that her status was made known to her late father during his dying moments and as a result of that, he disowned her from his lineage.