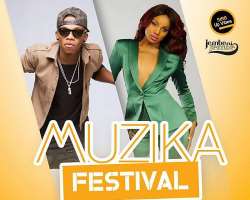 Superstar Seyi Shay earlier today took to her instagram to announce that she would be headlining a concert in Tanzania later this month.

The Pepsi ambassador has recently spoken in series of interviews about her intention to go on tour round Africa to promote her recently released album "Seyi or Shay" & the trip to Tanzania would mark the beginning of her tour around Africa.

The Muzika Festival will take place in Mwanza and will feature stars in Tanzania and beyond, superstars Seyi Shay and Teckno have been confirmed as headliners for the concert put together by STR8 UP ViBES.