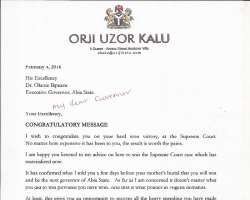 The letter which went viral immediately the highest court in the country, Supreme upheld the election of Chief Ikpeazu as against the petition filed by the All Progressive Grand Alliance (APGA) candidate, Dr. Alex Otti.

In detail, the letter went on to formally congratulate governor Ikpeazu on his victory at the Supreme Court, even as it acknowledged him for heeding to the advises pointed out by the former governor and eminent businessman, Orji Uzor Kalu.

However, the level of confusion experienced in the State, especially among the PDP family made all to wonder what OUK shares in common with the present governor.

Meanwhile, reactions are yet to come from the governor himself who is however still basking in the euphoria of his victory at the Supreme Court.