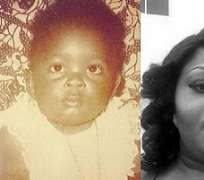 Plus size Nollywood actress, Eniola Badmus is one of the most sort after actress in the industry. She has carved a niche for herself. She is known for her rascal roles in movies which she earned the nick names like Enibad and gbogbo bigz girls.

The versatile actress studies theater arts in Lagos state university, so it's no coincident that she so good at what she does.

In the photo above is Eniola Badmus and her baby photo, she looks so adorable as an infant, pairing both baby photo and recent photo, that cute face hasn't changed that much from when she was a baby.