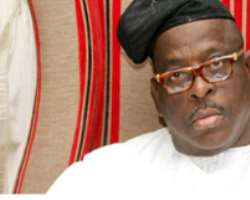 The Senate Committee on Ethics, Privileges and Public Petition has begun investigation into fresh allegations of moves by the National Drug Law Enforcement Agency (NDLEA) to extradite Sen. Buruji Kashamu to the U.S.

The Chairman of the committee, Sen. Samuel Anyanwu while meeting with the senator and his solicitor on the allegation on Wednesday in Abuja, said the committee would carry out its mandate.

He directed that all parties involved in the allegation, including former Chairman of (NDLEA), Ahmed Giade and the Director-General of NDLEA, should maintain status quo pending the committee's investigation.

“ Having heard from you the Solicitor to Senator Kashamu, you may now leave and be rest assured that we will hear from the other correspondents and we will come up with a position on this issue.

“Meanwhile I think it is obvious that when we make our investigation we will put down our report to the entire Senate.

“We have to invite the parties involved and not in representative capacity to answer to the allegations.

“This matter is before the senate and we think status quo should remain until we look at the issues in the petition and come up with a position,'' he said.

Anyanwu said that the committee would investigate to know if the case was before any court before proceeding, given that it received varying correspondents from the parties involved.

He added that while Mr Giade and the Attorney General had agreed to appear before the committee on the matter, the NDLEA boss wrote to be excused because the case was before the Court of Appeal.

`NDLEA DG wrote that the matter is in the Appeal Court and she should be excused from the matter.

“Meanwhile the Attorney General asked to be given between 9th and 12th of February to appear before the committee and Alhaji Ahmed Giade asked for more time to prepare and submit 12 copies of the written presentation before the committee,'' he said.

The Solicitor to Sen. Kashamu, Mr Ajibola Oluyede, alleged that there were plans to extradite the lawmaker to the United States to be tried afresh.

“Recently it came to our attention that there was a move again, not to extradite him.

“This is what is being planned currently against Sen. Kashamu and we have it on very good authority and you will see we have quoted from an agent of the NDLEA, a sympathetic agent.

“The reason we are here is that you should be able to look into this matter. Yes, there are certain aspects of this matter pending in court but there are aspects of it that the court can never look at.

“The court is not going to look into the internal workings of a government institution and find out whether those who have been appointed to hold office in that institution have carried out their duties in accordance with the Constitution of the Federal Republic of Nigeria.

He appealed to the Senate to use its powers to ensure that appropriate action was taken on the matter to protect the life of his client. (NAN)