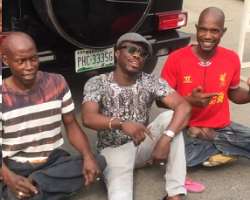 The Ikwere-Rivers State born multi-talented artiste, who is known for his rib-cracking jokes and witty acts, was spotted in the midst of two handicapped beggers this morning. Apparently, Julius wants to bring them to his show to also have fun like other privileged Nigerians.

The double-header concert will take place at the prestigious Eko Hotel and Suites, on Sunday, February 7, 2016 while the subsequent event will hold in Abuja on Valentine's Day.