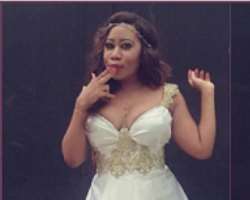 Nollywood actress Moyo Lawal took to social media a while ago to explain why she has been incommunicado for the past two weeks and how January wasn't fair to her.

The curvy diva in a long note narrated how she almost passed out in the hospital which was followed by an armed robbery attack.

"So a couple of weeks ago, I got so sick. I had to be hospitalised . The whole nine yards was wrong with me. I literally was so weak. My drips had to be rushed until I got stabilized. Energy was a luxury and I only used the little I had to communicate with family and the doctors(apologies to work and friends ,I left incommunicado).

However after a really bad night of stooling and vomiting bile, I had enough of the hospital especially because the nurse on duty that night was lazy (if not for my sister,I wonder what my story will have been) anyways I couldn't sleep and immediately I saw my sister move. I asked her to call my dad(who literally left everything to just come sit with me everyday) to come take me home, alas all his numbers and my stepmums phones was off.

They say the only way to get over a really bad pain is to feel something worse (true ). The energy I got that morning was amazing . Discharged myself despite the doctors refusal."
According to Moyo, she never knew the worse had happened until she got home, loo and behold, they were attacked by dare devil robbers.

She continued "She rushed home and guess what . Armed robbers (emphasis on the armed), just left my dads place with all the phones,iPads ,laptops etc ,they also left with two jeeps, All my stepmums gold (they hit gold literally) all the gold my mum left me and money nobody was harmed. Thank goodness . Its been a really low couple of weeks. Oh yes after I left the hospital. I got whew . But that's a story for another post . This is way too long sef who gonna read it ..what a January grateful for life.. p.s this is not a movie before you people start on that," she added.